Performance with Rolling Angels, and exhibition on Life-boats
is part of the 75-year commemoration for the bombardment og Dresden, Germany,
on 13th of February 1945

February 5th to 16th
An Art Project by Kunsthaus Dresden with the Danish-Norwegian artist Marit Benthe Norheim and the Norwegian composer Geir Johnson in the Urban Space of Dresden.
If angels existed, what could they help us with today? Various mythologies and religions have angels, or guardian spirits, in common – Judaism, Islam, Christianity, and also Buddhism is familiar with them. As messengers and intermediaries, they continue to reflect people’s worries about the future and the past. They are counterparts for our fears and worries in extremely distressful situations and stand for sorrow, but also for overcoming it. The angels of the Danish-Norwegian artist Marit Benthe Norheim mingle with humans, moving about on their rollers over the asphalt of our cities.
Like Paul Klee’s winged beings and the angels in Wim Wender’s film “Wings of Desire,” they are close to humans with their doubts and worries, but also in their joys and hopes and their quest for peace.
The art project is initiated by the Kunsthaus Dresden as part of the Museums of the City of Dresden on the occasion of the 75th anniversary of the destruction of Dresden during the war in February 1945. The flock of angels will be released into the public space in the center of Dresden in front of the Culture Palace on the 5th of February, 5 pm in the presence of the mayor of Dresden, Dirk Hilbert.
The flock of angels invites passers-by to move, their positions change upon the encounter. Two of the guardian angels from the flock of 17 concrete sculptures, “The Carrier” and “The Caretaker,” were created for and will remain in Dresden. In their arms and on their wings they carry the memory of the dead of the Shoah, the Second World War in Europe, and the still prevailing violence of war against people all over the world.
A sound installation inside the angels is based on the chirping sounds of insects and is a work by the contemporary Norwegian composer Geir Johnson. The project will be accompanied by postcards inviting passers-by to share their thoughts around the role, that angels could play in our contemporary life:
“If angels existed, what could they help us with? Would they need a passport? What would be their role in our shared life of today?“
Marit Benthe Norheim lives and works as a contemporary artist in Hjørring, Denmark. Her work will also be part of the group exhibition REQUIEM on contemporary artistic perspectives on commemoration and mourning at Kunsthaus Dresden from the 8th of February to the 26th of April 2020.
Geir Johnson lives and works as a contemporary composer in Oslo. His choir piece “Angel Revelation” has also been created in conjunction with the angels.
ROLLING ANGELS is a contemporary art project of Kunsthaus Dresden on the occasion of the 75th anniversary of the destruction of Dresden during the war in February 1945. Requiem is a project of “Rest in Peace” and “Neighbourhoods 2025”.

Mit sicherem Abstand [At a Safe Distance]. An art action on both sides of the Dresdner Elbufer on May 8

KUNSTHAUS DRESDEN - Press release 06(05-2020
The art performance taking place on Saturday, May 9, from 2 to 4 p.m. on the Elbufer on both sides of the Elbe River in Dresden, centers on the showing appreciation for 75 years of peace and commemorating the anniversary of the end of the Second World War and thus of the National Socialist period in Dresden.

The performance with 17 rolling angel sculptures made of white concrete by the Norwegian-Danish artist Marit Benthe Norheim with music by composer Geir Johnson will be presented under the title ROLLING ANGELS. Mit sicherem Abstand simultaneously on both banks of the Elbe at the three historical bridges, Augustusbrücke, Albertbrücke and Blaues Wunder.  All bridges in Dresden, except for Blaues Wunder, were destroyed by German troops shortly before the end of the war and rebuilt after the war. Today, the bridges can also be regarded as symbols of the connectedness of the urban community.

The performance stands for a reassessment of closeness and empathy that in times of the Corona pandemic preoccupies people all over the world.

ROLLING ANGELS ON MISSION IN DRESDEN

The arrival of Rolling Angels to the centre in front of the Culture Palace in Dresden on 5 November 2015.
Photo: Anja Schneider

Marit Benthe Norheim with the Roling Angels, just before they are leaving for Dresden

Excerps from the first mail request from Kunsthaus Dresden

TV2 Nord broadcast, made by Michael Andersen. Broadcasted on Tv 6. Februar
Sending angels on mission: They must give hope, comfort and peace to Dresden
The North Jutland Norwegian-born artist Benthe Norheim rolls 17 angels created in concrete into Dresden on an emotional mission. This is to mark the 75th anniversary of the Allies' bombing of Dresden during World War II.
06.44 min 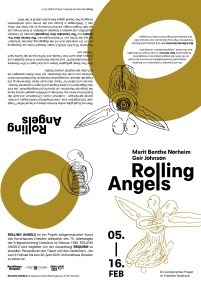 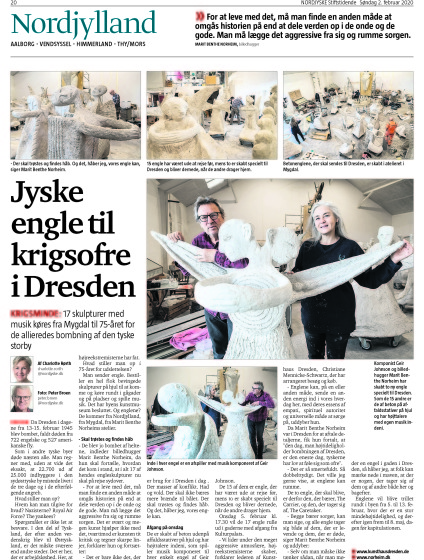 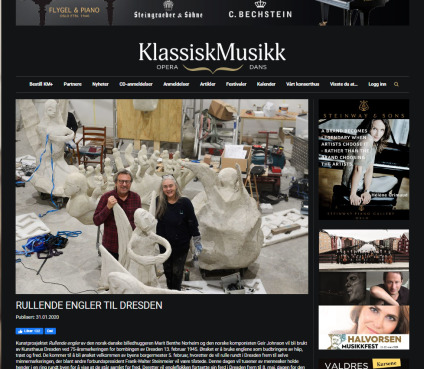 VIEW THE WORK, ROLLING ANGELS FROM 2000
VIEW MORE ABOUT THE ANGELS "THE CARRIER" AND "THE CARETAKER"