THE CARRIER AND THE CARETAKER, 2020 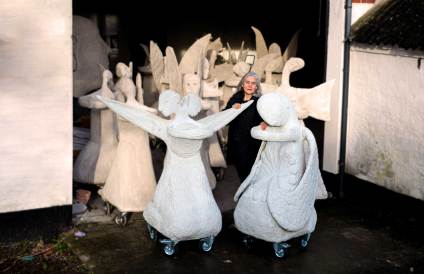 Rolling Angels in Dresden, Germany 2020 on the occasion of the 75th anniversary of the destruction of Dresden during the war in February 1945.

Two of the guardian angels from the flock of 17 concrete sculptures, “The Carrier” and “The Caretaker,” were created for and will remain in Dresden. In their arms and on their wings they carry the memory of the dead of the Shoah, the Second World War in Europe, and the still prevailing violence of war against people all over the world.
The flock of 17 Rolling angels where released into the public space in the center of Dresden in front of the Culture Palace on the 5th of February,  in the presence of the mayor of Dresden, Dirk Hilbert. Then they moved around Dresden until the Memorial on February 13, set in the program as a Performance of 17 angels. A day when thousands of people held hands in a ring around the city to show that they are united  for peace. The Angel Flock continues its journey in Dresden, until May 8, 2020, the day of capitulation. They want to use Rolling Angels as messengers of hope, comfort and peace.
The rolling angels are modeled in concrete, over dustbin armatures and have inlaid sound installations, created by the composer Geir Johnson.

Photos of The Carrier and The Caretaker in the courtyard of Mygdal, and on their journey around Dresden

THE FIRST MODELS IN SCALE 1:40 - press for large pictures

REINFORCEMENT, FIBREGLASS AND MODELLING OF THE ANGELS - press for large pictures

THE LAST MODELLING AND SOUND INSTALLATION - press for large pictures

The sound installations have been realized with the help of Henrik Albrectsen and Sune Blach Granberg.
With technical support from Notam (Norwegian Centre for Technology in Music and Art and supported by: