MADE FOR EUROPEAN CAPITAL OF CULTURE STAVANGER 2008

The bearing idea and simultaneously the inner armature of the construction of the cement sculptures are functioning caravans. Each of the female sculptures’ torsos grows out of the roof, such that the caravan functions as the skirt of the figure. One can enter the 4 metre tall Campingwomen which are the Refugee, the Bride, Maria the Protector, The Siren and the Campingmamma. Inside, the space has been customised in various ways - several of them with the participation of different population groups. The Refugee’s caravan is, for example, filled with porcelain reliefs about the process of fleeing, made by children and refugee women working together. Others with wallpaper made out of collected photographs.

The caravans are capable of being towed; they arrive behind their respective cars and have rolled around the European Cultural Capital of Stavanger 2008 region for 8 months on a constant journey. They have visited about 40 locations in the period, camping sites, parks, schools, town squares etc.

The installation has since visited Reykjavik Arts Festival, Iceland, Silkeborg Baths Arts Centre , Musikhuset and Aros Art museum, Århus, Heart Art museum in Herning and Holstebro, Denmark. As well as Finnmark Kulturdugnad Gamvik in the north of Norway. And many other places in Denmark.

Se the journey of the campingwomen untill now below

FROM JUNE 24TH - JULY 2TH 2017, CAMPINGWOMEN AND THE ROLLING ANGELS WHERE A PART OF VESTFOLDSPILLENE IN NORWAY

Campingwomen participated at the Science in the city festivalen in Copenhagen from the 21-26. june. Read more about the event HERE

29. JANUARY 2014 - CAMPINGWOMEN WINS THE ARTBEAT PRIZE OF 2014.
A DANISH DISSEMINATION AND CULTURE PRIZE

30. April. The Faculty of Humanities at Aalborg University  DK, has acquired Camping Women

Campingwomens two days roadtrip from Mygdal in Vendsyssel to Aalborg University in Copenhagen, for the opening of the new Recreate Centre. Where they were exhibited from 29. May -15. June 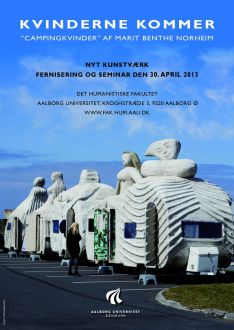 CAMPINGWOMEN ARE MOVING TO AALBORG UNIVERSITY

The Faculty of Humanities at Aalborg University has acquired Camping Women on April 30, 2013. Marit Benthe Norheim will still be in charge of organizing camping trips and exhibitions.

They will have a permanent place on the lawn at Kroghstæde 3, 9000 Aalborg, but they will occasionally be available for exhibitions and displays elsewhere.

"The purchase of Camping Women indicates that the Faculty of Humanities wishes to strengthen the interaction between art and knowledge creation. This is due to the fact that art affects our feelings and experiences and challenges our perceptions, while making us unsure of what we know, and make us think again. All this should be a natural part of the university's practice. "

Campingwomen on there way to Randers Artmuseum, Denmark 10.-26. marts 2013

In the summer of 2010, the Campingwomen drove to Skagen Odde Nature and Culture Centre and were there for the rest of the year, after the Bride came home from a stint at the Historic Museum in Vendsyssel.

In spring 2011, Maria the Protector travelled to a meeting of priests in Djursland, whilst the Siren and the Rolling Angels went to a performance in Holstebro together with the Odin theatre.

For the remainder of the summer 2011, all 5 Campingwomen were exhibited at Hirtshals Lighthouse.
Gallery 2010-2011

In 2009, the installation visited Iceland in May, as a part of the Reykjavik Arts Festival. They were driven from Mygdal to Aarhus in order to be shipped on containership for Iceland. It was a 2 day trip to Aarhus, with stop in Sæby and Aros Art Museum in Aarhus.

They were then on display at Silkeborg Bad Art Centre, in connection with the “Exile” exhibition.

After that, three of the Campingwomen travelled to Slettnes lighthouse in Gamvik, Finnmark, Norway to be a part of Kulturdagnaden in August, whilst the last two remained at Silkeborg Bad.

In September, the project visited  the music building and the Art Museum Aros in Aarhus. The new art museum Heart in Herning and The Music Theatre in Holstebro in Denmark. The Camping women, was among other things presented for 150 European cultural leaders in connection with an international seminar organized by Aarhus, working toward becoming a European cultural capital of 2017.

Two days roadtrip from Mygdal to Aarhus, whit stop in Sæby and Aarhus. On there way to the ship for Iceland

Music house and the Art Museum Aros in Aarhus. The new art museum Heart in Herning and The Music Theatre in Holstebro in Denmark

The Campingwomens' first journey on their own wheels, from Mygdal in Vendsyssel in Denmark, to Stavanger, Cultural Capital 2008, was a four day journey, planned as a series of happenings, with stops many places along the route, where we opened the doors so that random passersby could enter the women. We stopped in towns, on the Danish beaches as well as at several campsites.

We had 5 voluntary drivers and the passengers were, in addition to the artist and the composer, cultural personalities from Denmark and Norway as well as craftspeople and supporters who had been a part of the process and the completion of the project. The camping trip was a taste of what the sculptures were capable of, by bringing art to places where people do not usually look at art. The people who came with on the trip were also some of the best cultural ambassadors in Denmark and Norway, including the former Danish Minister of Culture, Elsebeth Gerner Nielsen, who is now the leader of the Design School in Kolding, Else Marie Bukdahl, the “grand old lady” of the Danish art world, Dr. phil and former rector of the Danish Royal Academy of Art for 20 years and the author of a series of art books and articles as well as Norwegian Jorunn Veiteberg, also Dr. Phil and professor at Kunsthøjskolen in Bergen, living in Copenhagen.

Our camping trip and the stops on the journey provided viewers with the opportunity to come into the caravans, hear the music and come into dialogue with the “campers”.

The sculptural and musical experience space