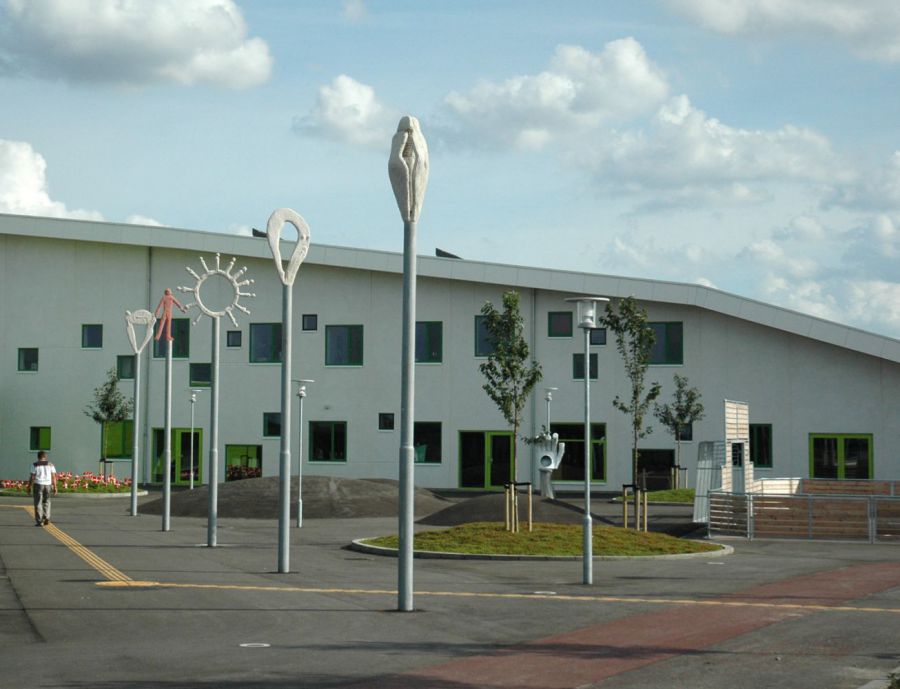 Five used light poles with figurative ends outside the main entrance to Tjørring school and daycare centre, DK. A sustainable school, shaped like a star, by Friis and Moltke Architects, 2011.

When growing up and getting an education, one needs to be able to balance between many states of being, impressions and people. One needs to learn to take chances, whilst still maintaining control and discipline to reach the goals that one sets for oneself. It is natural for children and young people to test their boundaries in a variety of ways, which is why I have placed some of the figures on the edge.

I want the column figures to be open in their narratives and to be capable of creating many kinds of associations. My keywords during the creation of the figures: stars – the sky – columns – children – play – balance and the act of stretching oneself. The columns, seen from a distance, provide the figures with their own plateau – their own world/place – with the heavens as a background.

The figures can be seen from a great distance and are representative of each "star-arm's" functions based on dialogues with the school. The figures at the top of the columns are proportioned such that one needs to get close to them to see the details. They are raised without being heroes - but with a content that will hopefully provide food for thought.

The columns also function as pedestals - that lift up - because lifting up is important. Which banner do you want to hold up high? In war, battles and in various parades/processions of religious and political character, people have often chosen to carry flags, banners or "standards". Symbols/images that were chosen to represent the respective events, provided pride, courage and strength to the participants and also gave them new identities.