ANGEL OF SMILES
- A mobile sculpture as a symbolic portrait of Stasé Samuleviciené.

Since September 2021 my installation titled Rolling Angels, consisting of 15 sculptural mobile angels, (modelled in concrete over second-hand rubbish bins) have been residing in Linksmakalnis. They have been used by a contemporary circus group who have pushed and pulled them through Linksmakalnis and Kaunas City

In addition to bringing this flock of Rolling Angels, I was asked to create an angel specifically for the small town Linksmakalnis, who would be staying there permanently.

““Linksmakalnis is one of the villages with a unique history. Once a manor owned by a German family, then a village called Merry manor, during the Soviet occupation Linksmakalnis became an enclosed secret military town with many radio antennas and Russian soldiers. After the Soviet troops withdrew in 1993, the settlers settled here. Today, in a town lacking a sense of local identity and a sense of community, the complex traumas of history still cast their shadows.” *Quote from the invitation letter from Kaunas 2022 “Memory Office” program curator dr. Daiva Citvarienė.

The sculpture was handed over on the 1st of October in Linksmakalnis, with speeches by the Elder/Mayor of the town, three representatives from the European Capital of Culture Kaunas22, Representative from The Danish Cultural Institute and the artist. There was also a handover performance by Džiugas Kunsmanas and Sigrid N. Ørntoft, accompanied by the music for the Angel of Smiles and a concert by local musicians.

In 1995 I participated in an exhibition at Ciurlionis Museum in Kaunas, where I bought a brochure about the Lithuanian folk artist and children’s book author Stasė Samulevičienė. This woman received in 1977 the “Order of Smiles” which was given to people who had shown a great compassion towards children.

I found the booklet about her, titled Smile – and decided that this little town needed the energy that I found in the story of Samulevičienė. The angel for Linksmakalnis is therefore a symbolic portrait of this woman, where I have tried to work out a smile without sentimental or scary connotations. Stasé Samulevičienė made small fluffy creatures which also illustrated her stories.

As an event for the opening ceremony, I had collected second-hand teddies from Denmark and fastened them to my costume with safety-pins. In my speech I explained to the  audience that these creatures had lost their beloved ones and invited them to pick one from my body, if they promised to give them renewed love – in the spirit of Stasé and the Angel of Smiles.

The music within the sculpture was made by the composer Tonje T.S. Norheim. Here is her description: “The composer for the 18 previous Rolling Angels; Geir Johnson tragically and unexpectedly passed away last year, and I was asked to take on the composition for the new addition to the 18 mobile sculptures (music installed inside the sculpture) Amongst trying to capture the beauty and melancholy of Linksmakalnis under this sculptures smile, I incorporated micro samples of Geir Johnson’s previous choir work (torn apart more and more, until less is recognized or even heard towards the end). I also took pleasure in mimicking his electronically produced Angel-scapes (previously mimicking insect sounds) using a classic 303, emphasizing the multitudes of the uses of a smile and sure curiosity in her expression. Angel Of Smiles will stay permanently in Linksmakalnis in Kaunas Region, where she will be moved to a new spot every month, to help her continue to spread her existential smile to the people there.”

“The sculpture was made in Norheim’ s iconic gargoyle-like design and from sustainable materials.
It combined inspiration from Lithuanian religious and folkloristic art traditions as well as from the minimalism and seriousness connected
with Nordic design and art. Thus, it showcases Nordic art in a way that is meaningful to local Lithuanian traditions”

*Quote from Amalie Sørensen, at The Danish Cultural Institute.

PHOTOS FROM THE INAUGURATION OF "ANGEL OF SMILES" TO LINKSMAKALNIS 01.10. 2022

Listen to the composition made for the work, by composer Tonje T.S. Norheim

By composer for “The Angel Of Smiles”, Tonje T.S. Norheim / Mirrorship

"Amongst trying to capture the beauty and melancholy of Linksmakalnis under its smile, (the tragic history of the shadowed past; - of it being a Russian secret military base up until 1993, after starting as a German military mansion) I Incorporated micro samples of Geir Johnson’s previous choir work (torn apart more and more, until less is recognized or even heard towards the end). I also took pleasure in mimicking his electronically produced Angel-scapes (previously mimicking insect sounds) using a classic 303, emphasizing the multitudes of the uses of a smile and sure curiosity in her expression." 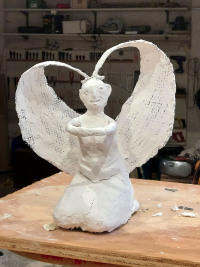 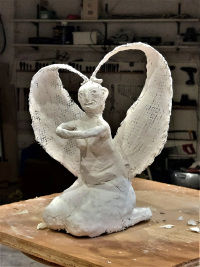 Excerpt from idea description for the sculpture SMILE

A few years ago The wife of the major of Linksmakalnis made an Angel Museum in their town hall which is situated in the old military barracks reception. The contemporary circus director Roberto Magro continued the idea of giving the irrational angel creatures significance in this little town. He involved acrobats and the local population in making angels visible. In this context my Rolling Angels were brought in almost a year ago and these 15 sculptures have been in use by the European Capital of Culture Kaunas22 as symbols of hope and comfort.
My new angel sculpture which is in the making, will join the flock of Rolling Angels this autumn and will stay on after the rest of the flock will return to Denmark. The collaboration with Roberto Magro will continue during the European Capital of Culture year 2022, where the Rolling Angels and the Angel of Smile will be used as part of his project “Radio Angels”.
An angel of Smiles
My idea for the angel that I am in the process of making specifically to use and to keep in the village of Linksmakalnis, is based on the creator of Fluffies and children’s books; Stasé Samuleviciené (1906-1988).
The Angel of Smiles – based on Stasé Samuleviciené: – A very expressive and playful Angel of Smiles, with underlying melancholy. This angel appeared in my mind first and foremost with very playful wings. Curly and quite large in relation to the figure.

Supported by: The Danish Cultural Institute in Estonia, Latvia and Lithuania