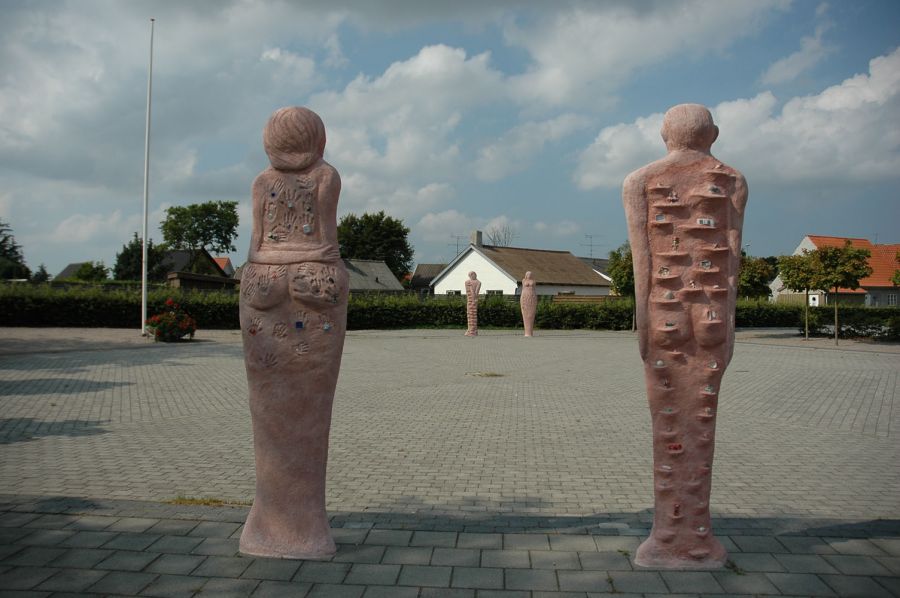 The title refers to Tårs as a former station town. The sculptures appear, at first glance, to be homogenous, as if they belong to their own race. When you meet them individually, you can see the differences, the individuality, both through their gestures, facial and body expressions, but also through the details, which children from Tårs took part in creating. The sculptures are large enough to tower a little over human height, and thus become a community within themselves, but they are also not so big as to appear monumental and unapproachable. In a town environment where distance and the town space are a more intimate environment than out in the open landscape.

Four of the 8 travellers are located on the town square, as if they are waiting for something to happen, as observers - but also as if they could ask one another to dance in the welcoming space of the town square.

Two nursery schools in Tårs have created a pair each.

The receivers: The female figures have been given the imprints of children’s' hands on their bodies, as mother figures who are touched. In addition, the children have all come with their own chosen treasure, like e.g. a shield, stone, marble, button, etc. These have been molded into their hand print impressions.

The bearers: The male figures are also intended as clear, understandable models of the strengths that men often express and show. They are bearers of slightly larger things in plastic. stone, glass or metal, which children have taken with them and "left behind" at the father figures - on the shelves modelled into their bodies